Skip to content
Turn Back Covid-19
You are here : Home / English / 3 ex-Shell employees linked to $200m heist charged with graft 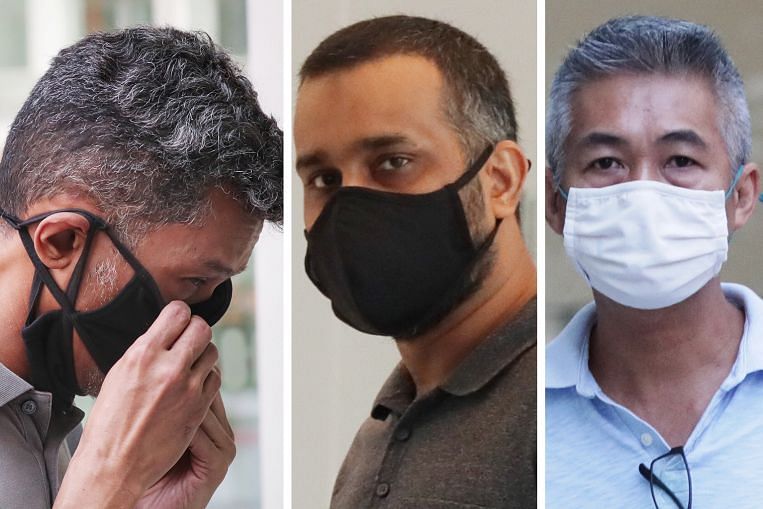 Three former Shell Eastern Petroleum employees linked to a $200 million gas oil heist have been charged with bribing employees of surveying companies who inspected vessels which the oil giant supplied fuel to.

Juandi Pungot, 44, Muzaffar Ali Khan Muhamad Akram, 40, and Richard Goh Chee Keong, 51, appeared before a district court yesterday to have their charges read out to them.

All three had previously been charged with criminal breach of trust over their alleged involvement in a conspiracy that led to more than 300,000 tonnes of gas oil worth about US$150 million (S$198 million) being stolen from Shell’s biggest global refinery.

Juandi and Muzaffar Ali Khan face 13 charges each, while Goh faces four charges, for offences under the Prevention of Corruption Act.

Between 2014 and 2017, Juandi and Muzaffar Ali Khan allegedly conspired to give bribes totalling about US$91,900 to 10 employees of surveying companies to inaccurately report the amount of gas oil loaded onto vessels which the employees were engaged to inspect.

Goh is accused of bribing three employees of surveying companies with a total of US$25,000 for the same reason between 2016 and 2017. The three men will be back in court next month.

A spokesman for Shell said it is working with the authorities and industry associations to address the issue of oil theft in the region.

“What we uncovered is unacceptable and we have taken significant actions to help prevent a similar situation from happening again, focusing on areas including the monitoring of products moving in and out of Bukom, the vessel management process, and stepping up ethics and compliance training,” added the spokesman, referring to Pulau Bukom, the offshore island that houses Shell’s refinery.

If convicted of graft, an offender can be jailed for up to five years and fined up to $100,000 for each charge.

The Billionaire Behind the Biggest U.S. Tax Fraud Case Ever Filed

Kaede Yasuno: ‘Nursing is a job with a lot of responsibility’

Tokyo Olympic spectators may be limited to Japan residents

Pupils with social and behavioural difficulties to get help easing into Primary 1: Sun Xueling

Andy Murray approaching each match as if career hangs in balance

Trump Is Gone, but Democracy Is in Trouble