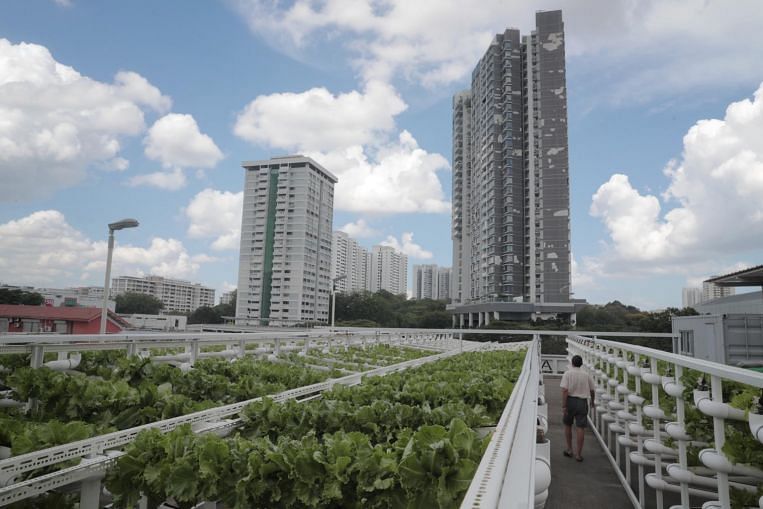 SINGAPORE- The Republic’s skyline is set to become a little greener.

The sites are located in the heartland areas of Bukit Panjang, Woodlands and Sembawang. They form part of HDB’s Green Towns Programme to intensify greening in housing board estates, said the two agencies in a joint statement yesterday.

The rooftop farms are intended for farming vegetables and food crops. Successful applicants will get a tenancy period of three years, with the option to renew for two more periods of three years.

“Availing more spaces in land-constrained Singapore for commercial farming, including alternative spaces like HDB multi-storey carpark rooftops, is one of the strategies SFA has been undertaking to achieve Singapore’s ’30 by 30′ goal, which is to produce 30 per cent of our nutritional needs locally by 2030,” the two agencies said.

This follows last September’s public tender for nine such locations, eight of which look to be operational by the middle of this year.

“SFA awarded nine HDB multi-storey carpark rooftop sites for urban farming in September 2020. However, the successful tenderer for the site at Kim Keat Avenue eventually withdrew their bid. The remaining successful tenderers are finalising their layout plans and farming equipment, and their farms are expected to be operational by the second quarter of 2021,” said an SFA spokesman in response to queries from The Straits Times.

This scheme to help increase integration between urban housing needs and sustainability goals comes as Singapore moves towards a greener future, with the announcement of the Singapore Green Plan 2030 – an ambitious set of objectives for Singapore’s sustainability future – coming just a few months ago.

“We are heartened by the continued interest from both the local agri-food industry and the public towards urban farming in community spaces,” said Mr Melvin Chow, senior director of SFA’s Food Supply Resilience Division.

“It is great to see residents in the area enjoying fresh produce straight from such farms and found conveniently at nearby supermarkets,” he added.