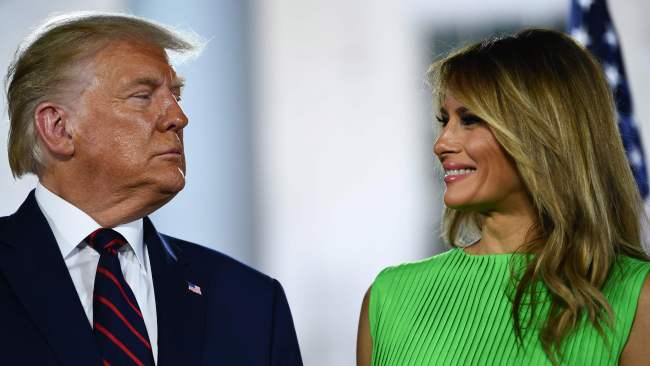 On January 6, as her husband’s supporters stormed the US Capitol, Melania Trump received a text. Her response “shocked” her top staffer.

Former US president Donald Trump and his wife Melania are both dealing with damaging new revelations from a pair of upcoming books.

The two books in question are Peril, written by Watergate journalist Bob Woodward and The Washington Post’s Robert Costa, and I’ll Take Your Questions Now, written by former White House press secretary Stephanie Grisham. The former releases a week from now on September 21, the latter on October 5.

Ms Grisham was the third of four press secretaries during Mr Trump’s term in office, though she never held a briefing, which makes the title of her book a tad ironic. She also served as Mrs Trump’s chief of staff.

Yesterday, Politico’s Playbook newsletter published an anecdote from the book shedding light on Mrs Trump and her actions during the Capitol riot on January 6.

Ms Grisham writes that she texted Mrs Trump at 1:25pm, shortly after a mob of Trump supporters overran barricades outside the US Capitol Building and started to clash with law enforcement. The rioters were attempting to stop Congress from certifying Joe Biden’s election win.

“Do you want to tweet that peaceful protests are the right of every American, but there is no place for lawlessness and violence?” Ms Grisham asked the first lady.

A minute later, Mrs Trump responded with a single word: “No.”

At the time, she was reportedly at the White House preparing for the photo shoot of a rug she had selected.

According to Politico, Ms Grisham writes that Mrs Trump’s “dismissive” and “detached” response to the violence “broke” her, convincing her that the woman she’d defended from public criticism was a “Marie Antoinette-type dilettante”.

Ms Grisham also says she was “shocked” to learn that Mrs Trump shared her husband’s false belief about the election being stolen through widespread fraud. She claims Mrs Trump would not listen to reason on the subject.

This is not the first unflattering book from someone who was formerly close to Mrs Trump. It comes about a year after the one written by her estranged friend Stephanie Winston Wolkoff. The former first lady is reacting in much the same way – by impugning the motives and credibility of the author.

“The intent behind this book is obvious. It is an attempt to redeem herself after a poor performance as press secretary, failed personal relationships and unprofessional behaviour in the White House,” her office said in a statement.

“Through mistruth and betrayal, she seeks to gain relevance and money at the expense of Mrs Trump.”

Meanwhile, a “publishing source” told Politico Ms Grisham had “secrets about Mr Trump that even the first lady doesn’t know” about, and that he “doesn’t want her to know”.

“They will be in this book,” the source promised.

Peril is largely concerned with Mr Trump’s complacent response to the coronavirus pandemic, which has killed 670,000 Americans so far. But details published in The Washington Post today instead focus on the post-election period.

Woodward and Costa report that America’s top military officer, chairman of the Joint Chiefs of Staff General Mark Milley, was so worried that Mr Trump might spark a war with China before leaving office that he defied the chain of command and secretly told his Chinese counterpart the US would not attack.

The authors reveal there were two secret phone calls between Gen Milley and Chinese General Li Zuocheng, the second of which took place on January 8, two days after the Capitol riot.

“We are 100 per cent steady. Everything’s fine. But democracy can be sloppy sometimes,” Gen Milley said.

During the first phone call a few months earlier, Gen Milley reassured Gen Li that he would warn him if the US decided to launch any strike.

“You and I have known each other for now five years. If we’re going to attack, I’m going to call you ahead of time. It’s not going to be a surprise,” he said.

The US military is supposed to operate under the principle of civilian control – the civilian president and secretary of defence, accountable to the people, are ultimately in command, not the generals. Gen Milley’s conduct, reaching out to China without the president’s knowledge, was an extraordinary contravention of that principle.

Woodward and Costa write that Gen Milley “believed the president had suffered a mental decline after the election”. As supporting evidence, they cite a phone call the general had with House Speaker Nancy Pelosi the day after the riot.

“He’s crazy. You know he’s crazy. What he did yesterday is further evidence of his craziness,” Ms Pelosi put to Gen Milley.

“I agree with you on everything,” he responded.

In the lead-up to January 6, Mr Trump publicly and privately pressured Mr Pence, who was to preside over the joint session of Congress, to reject the electoral college votes from critical states Mr Biden had won – something Mr Pence had no authority whatsoever to do.

In the end, Mr Pence refused, saying it would violate the US Constitution. But not before asking trusted confidants whether there was any way he could comply with Mr Trump’s demands.

Mr Quayle was the Republican vice president in 1993, when Democrat Bill Clinton took power. He oversaw the certification of Mr Clinton’s win over George H.W. Bush. And his response to Mr Pence was unambiguous.

“Mike, you have no flexibility on this. None. Zero. Forget it. Put it away,” he said.

On January 5, the day before the riot, Mr Pence told Mr Trump he could not reject the results.

“I don’t want to be your friend anymore if you don’t do this,” Mr Trump reportedly responded.

“You’ve betrayed us. I made you. You were nothing.”

Twenty-four hours later, the president’s supporters were marching on Congress chanting “hang Mike Pence”. After four years of loyalty, he had become a pariah.