Skip to content
Turn Back Covid-19
You are here : Home / English / China set to weigh heavy on Biden’s first G-7 in Cornwall

LONDON — The leaders of the Group of Seven club of wealthy democracies will meet in Cornwall, England, on Friday for their first in-person summit since the onset of the pandemic — and perhaps the group’s most important gathering ever.

After years of disunity, and facing urgent global challenges, there is pressure on the G-7 leaders not to just promise, but to deliver.

“Everyone is recognizing that there really is the potential for G-7 leaders to do something very dramatic this year and appear as sort of superheroes to save the world,” said Robert Yates, director of the Global Health Program at the British think tank Chatham House, at a recent online event.

Health, pandemic recovery and climate change will be major themes for the summit, and the issue of China is likely to run through the discussions that mark U.S. President Joe Biden’s international debut.

“China is obviously not at the summit, but on any number of fronts — be it the economy, be it climate change, be it Taiwan — they’re sort of the elephant not in the room,” Tristen Naylor, fellow in international relations at the London School of Economics, told Nikkei.

The U.K. has demonstrated the geopolitical significance it places on the Indo-Pacific region through the guests it has invited to the summit. India, South Korea, Australia and South Africa will join the latter portion of discussions, though India will attend virtually due to the domestic coronavirus outbreak.

The meeting of G-7 foreign ministers in May saw united condemnation of China’s alleged human rights abuses, support for Taiwan’s participation in World Health Organization meetings and stability in the Taiwan Strait. Nikkei has learned that discussions are underway to include a reference to the Taiwan Strait in the leaders’ joint statement.

A veiled measure to counter China could come in the form of a proposal for a G-7 infrastructure investment alternative to China’s Belt and Road Initiative. The U.K. and U.S. leaders have both hinted at such an idea in opinion pieces.

The Inter-Parliamentary Alliance on China, a group of international cross-party parliamentarians, has called on G-7 governments to do exactly that, and to reform global supply chains by banning the import of goods produced by forced labor, referring to the alleged human rights abuses in Xinjiang. 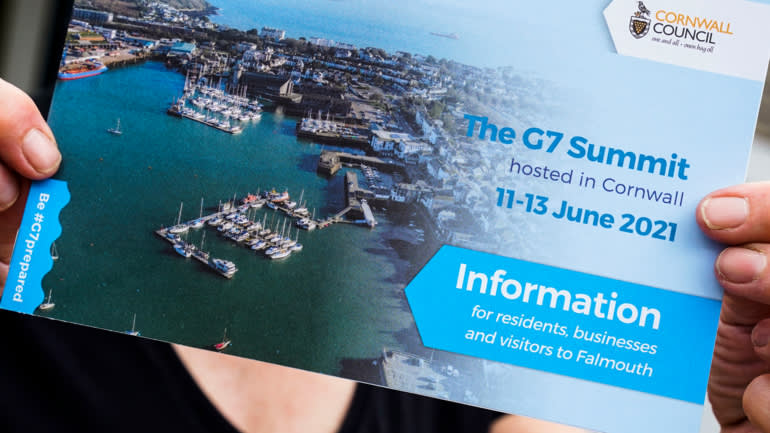 A resident holds up an information booklet that provides guidelines for local residents and businesses on the likely disruption to normal life caused by the G-7 Summit.   © Getty Images

On health, there has been mounting pressure from world leaders and organizations for wealthy countries to do more on vaccinating the world. U.K. Prime Minister Boris Johnson has stated his aim to galvanize the G-7 summit to vaccinate the world by the end of next year, proposing a target for the G-7 countries to provide 1 billion doses to developing countries.

The U.K. has announced it will donate 100 million doses within the next year, starting with 5 million doses by the end of September.

“Nothing could provide more compelling or tragic proof of the necessity of global cooperation than the pandemic that has swept the world and claimed over 3.7 million lives,” Johnson wrote in an op-ed for Nikkei. “I want the G-7 to adopt an exacting yet profoundly necessary target: to provide 1 billion doses to developing countries in order to vaccinate everyone in the world by the end of next year.”

Climate will be also a key topic, especially for the U.K., as it will host the United Nations’ COP26 talks in November and will be pushing for more commitments from G-7 states. Pledges were made at a ministers’ meeting in May to end new financing for coal power by the end of 2021 and to transition to “an overwhelmingly decarbonized power system” in the 2030s. They all also agreed to conserve or protect at least 30% of the world’s land and ocean by 2030.

“The G7 can take forward both aims by supporting a green industrial revolution and promising to halve our carbon emissions by 2030, in order to limit the rise in global temperatures to 1.5 degrees,” Johnson wrote in his op-ed.

The G7 will also be discussing shared values and the economy in the post-pandemic recovery. This is expected to include building resilience in global supply chains and promoting open societies and inclusive growth.

Another anticipated announcement is in finance, to endorse the G-7 finance ministers’ proposal for a global minimum corporation tax of 15% and to combat tax avoidance by making multinationals pay taxes where they operate.

Another talking point will be the impact that the change in U.S. leadership has in the global arena and the rebuilding of relationships. The G-7 leaders struggled to unite while the U.S. was represented by President Donald Trump over the last few years.

In an online event by Chatham House on the G-7, the think tank’s deputy director, Renata Dwan, said that the G-7’s present role is to spearhead international action and set agendas for global issues.

LSE’s Naylor pointed out that the G-7 has been overtaken by the Group of 20 as the top table of global economic governance, and that messaging has become central for the G-7.

“This is a chance to say, look, we’re not the biggest economies anymore, but what we are is a group of like-minded allied democracies, and that’s the unique role that we can play in the world. Whether or not that’s going to work or not, is anybody’s guess,” Naylor said.