Skip to content
Turn Back Covid-19
You are here : Home / English / HSBC chooses duo to lead Asia growth charge as Wong bows out

HONG KONG — HSBC Holdings’ decision to anoint joint chiefs for Asia underlines the importance of the bank’s pivot to the region — and the role played by outgoing head Peter Wong in the past decade to bring the U.K.-headquartered bank closer to its Asian roots.

The pair will replace Wong, who has been at the helm in Asia since 2010. Wong will become nonexecutive chairman of Hongkong and Shanghai Banking Corp., the lender’s local unit, and an adviser to the group’s most senior leaders — CEO Noel Quinn and Chairman Mark Tucker.

“The move to have two heads in place of Wong exemplifies the work required in the coming years to achieve what Quinn and Tucker have set about to do in Asia,” said Michael Wu, an analyst at Morningstar in Hong Kong. “It also shows the role played by Wong over the past decade in building out the franchise in China [and] expanding in the rest of the continent. His role is now big enough to split it.”

Kelvin Lam, a former greater China economist at HSBC and currently a Hong Kong southern district councilor, said Wong had helped the bank to build extensive connections in mainland China and shift its focus from Europe.

“These networks will remain as HSBC’s assets, even after [Wong’s] departure,” Lam said. “As we all know, personal connections are key in the China market.”

Wong’s successors will have to help the lender navigate the souring relationship between Beijing and Washington, as well as China’s crackdown on the bank’s biggest market, Hong Kong, just as it is counting on Asia for growth. The 156-year old bank, which for most of its existence has deftly straddled political divisions between East and West, drew flak from U.S. and U.K. authorities for its endorsement of new national security laws imposed on Hong Kong by Beijing last year.

At the same time, Chinese state media stepped up attacks on the bank over its alleged role in the arrest of Huawei Technologies Chief Financial Officer Meng Wanzhou. Reports accused HSBC of providing information to the U.S. Department of Justice over the telecom company’s dealings in Iran. While HSBC has denied any wrongdoing and defended its conduct, Meng’s lawyers have argued that she was upfront with HSBC about the company’s Iran business.

Wong, a member of the top Chinese political advisory body, the Chinese People’s Political Consultative Conference, is credited with smoothing the bank’s relationship with China and ensuring the lender did not lose out on deals. 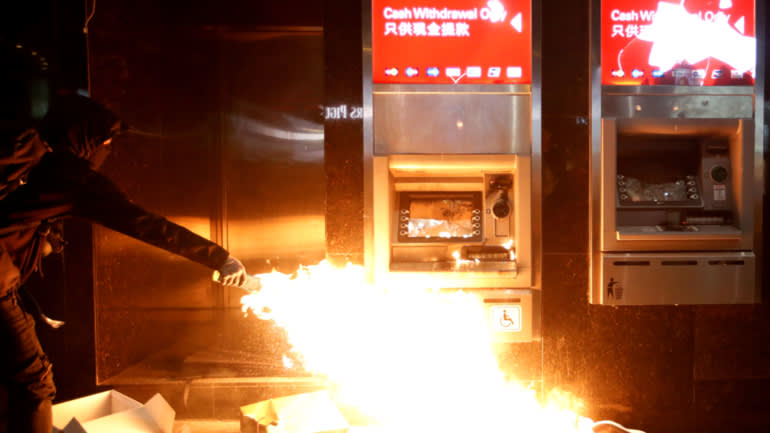 A protester feeds a flame near an HSBC ATM machine during an anti-government demonstration in Hong Kong in 2020. The bank drew flak for its endorsement of new national security laws imposed by China.   © Reuters

It was Wong who was picked by HSBC to showcase its public endorsement of the Hong Kong national security laws last year, with the bank’s social media accounts releasing a photo of him signing a petition in Hong Kong in support of the law.

Wong was also instrumental in helping HSBC build the widest foreign bank network in China, giving it a head start over rivals. He was also pivotal in securing the $6 billion in additional investment for its wealth management, commercial and markets businesses in the region this year.

Quinn in April said the bank was evaluating wealth management acquisitions in Hong Kong, China, Singapore and India to speed up its expansion and tap opportunities from China’s “wealth management connect” plan. This will allow households in the Greater Bay Area, which includes Guangzhou and Shenzhen, to buy investment products in Hong Kong.

The investment is part of a plan to deploy half the bank’s capital — which underpins its lending — in Asia in the medium term to achieve double-digit growth in the region.

The bank is also moving all the heads of its main revenue-generating businesses to Asia from the U.K. Wong’s leadership “over the past 11 years has seen us grow our revenues in Asia substantially and build our lead in key sectors even as the markets underwent rapid change,” Quinn said in a statement announcing the management change. Liao and Rosha “will lead this next phase of our Asia strategy as we focus on expanding and diversifying our presence across the world’s most dynamic region.”

HSBC, which was founded in 1865 as the Hongkong and Shanghai Banking Corp. to take advantage of growing trade between Europe, China and India, was already the largest regional player when Wong took over. Over his tenure the bank’s Asian operations have further expanded.

Asia’s share of revenue has almost doubled to 53%; the region was instrumental in ensuring that HSBC turned a profit over the past two years. And more than half its more than 200,000 employees are in the region, compared with two-fifths in 2010.

At the same time, the region’s share of risk-weighted assets — the minimum amount of capital a bank holds against loans, adjusted for relative riskiness — rose to 44% from 29%.

The Asia-Pacific business has also contributed $62 billion in dividends to the parent group since 2010, Wong said in an internal memo seen by Nikkei Asia. Meanwhile, HSBC is shrinking in the rest of the world. Last month, it announced its exit from U.S. retail banking after agreeing to sell most of its branches. It is also said to be negotiating the sale of its French retail operations.

Wong assumed the top role in Asia just as many global banks crippled by the financial crisis were pulling out of overseas markets, including Asia.

HSBC has thrived in the past decade despite challenges from “natural disasters, geopolitical tensions and most recently, the COVID-19 pandemic,” Wong wrote in the memo to staff. The “Asia-Pacific is at the heart of both HSBC’s past and its future. With three of the business heads shortly moving to the region, we are getting the money, resources and focus we need to make the most of the opportunities.”

Nuno Matos, global head of wealth and personal banking, Greg Guyett, co-head of the investment bank and Barry O’Byrne, CEO of global commercial banking, are moving to Hong Kong from London in the second half of the year, the bank has said. Liao and Rosha will also be based in Hong Kong.