Skip to content
Turn Back Covid-19
You are here : Home / English / iRobot breaks with Hong Kong partner over China production

HONG KONG — iRobot has broken off ties with the Hong Kong company that for years helped develop and produce the robotic vacuum Roomba in the latest fallout from the U.S.-China trade conflict.

Without mentioning iRobot by name, Kin Yat Holdings said in a premarket exchange filing Tuesday that a “significant customer … which is a leading American technology company specializing in robotic floor care products” was ending its service contract, noting the customer accounted for 55% of total revenues for the year ended March 2020.

Kin Yat said the termination stemmed from its client’s desire for more geographic diversification of production. It added that rising production costs in China, where Kin Yat’s factories are concentrated, also played a role.

Kin Yat shares tumbled on the Hong Kong exchange on Tuesday, ending down 16.8% at 94 Hong Kong cents, despite the company stating that it is “optimistic about the prospects of securing alternative businesses with higher profit margin in the future.”

iRobot has been shifting production gradually out from China amid rising tensions between Washington and Beijing.

“Our plan to substantially increase our production in Malaysia over the course of this year is progressing well, even with the tight labor market,” Julie Zeiler, executive vice president and chief financial officer, told analysts during a first quarter results online call on Tuesday. 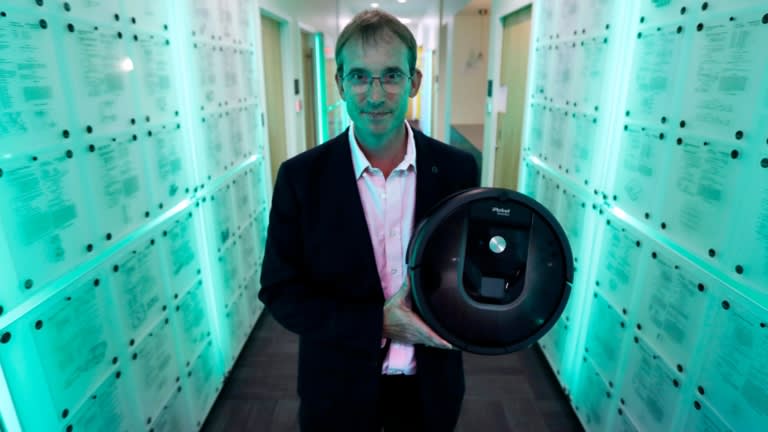 She said in a previous earnings call in mid-February that “by the end of 2021, we estimate that Malaysia manufacturing will have sufficient capacity in place to support the vast majority of our 2022 North American volume requirements.”

By making this shift, the company said in its annual report also released in February, “we believe that we will substantially reduce and potentially eliminate our exposure to current U.S. tariffs, and mitigate the geopolitical risks associated with concentrating production solely in China.”

In her comments, Zeiler noted that Washington had reinstated a 25% tariff on Roombas imported from China at the start of the year, which she said has increased costs by $3.4 million during the first three months. The gross margin would have been 1.1 percentage points higher if there were no tariffs, she said.

iRobot’s reference to geopolitical risks suggests security may have factored into its production shift amid worries in the U.S. and allied nations about the possibility of China-made gadgets being used to covertly transmit sensitive data.

Nikkei reported on Tuesday that NTT, Japan’s largest telecom carrier, has started to restrict the use of drones made by China’s DJI, which has already been blacklisted by the U.S. government.

China’s O-Film Group last week reported a net loss for 2020 of 1.94 billion yuan ($300 million) as a result of one-off charges from the loss of contracts producing iPhone camera and touch module components. The company was added to another U.S. blacklist last year in relation to alleged involvement in human rights abuses toward the China’s Uyghur Muslim minority.

According to iRobot’s website, Roomba production also involves factories in southern China run by three other companies: BYD, better known for its electric vehicles; Hong Kong’s Simatelex Manufactory; and U.S.-based Jabil. iRobot’s annual report mentioned that one of the partners had started production in Malaysia in 2019.

Kin Yat has itself been expanding to Malaysia. Its annual report noted the relocation of motor production there from China for an unnamed Korean customer and said it would look at increasing its presence in Southeast Asia, including possibly Myanmar, “with a view to reducing the adverse impact of the Sino-U.S. trade dispute.”

Asked why its Malaysian production base was not considered in the negotiation with iRobot, the public relations agency representing Kin Yat told Nikkei Asia its operation in the Southeast Asian country “plays a supplementary role [that] mainly serves our motor segment on motor drives and motor drive-related products” and is not suited for robotic vacuum cleaners.

Cheng Chor-kit, Kin Yat’s founding chairman and chief executive, said in November the company would also “continue to diversity its customer portfolio to reduce its concentration risk, particularly to develop clientele in some other countries and high-potential markets outside of the Sino-U.S. trade disputes.”

Based on figures from Kin Yat’s disclosure Tuesday, its reliance on iRobot peaked in the year ended March 2019, when its key U.S. customer accounted for 65% of total revenue, or 2.66 billion Hong Kong dollars ($342.47 million). That fell to HK$1.7 billion the following year.

Kin Yat, which began as a toymaker in 1981, started moving its production from Hong Kong into the adjacent mainland city of Shenzhen in 1985. According to its website, it began collaborating with iRobot on the development of the Roomba in 2007.

“Contributing our manufacturing and technology expertise in this production partnership with iRobot, we have been delighted to witness very positive results since this consumer robot’s market debut,” the website says.

While Kin Yat has been shifting some of its manufacturing operations further inland in China due to rising factory wages — first to Shaoguan, which like Shenzhen is in Guangdong Province, then to the interior province of Guizhou — high-value production, including Roombas, has remained in Shenzhen.

Instead, Angle changed the topic to some component suppliers that had “de-committed” when certain parts were in short supply, including chips, saying “our business is not immune” to that.

Asked about the talking up of iRobot’s “long-term relationship” and the company’s parting with Kin Yat, Charlie Vaida, director of global external communications at iRobot, told Nikkei Asia in an email on Wednesday that “it’s our practice not to discuss specifics when it comes to our supply chain relationships.”

50Plus out of the Tweede Kamer as leader splits from party

This is where all your digital data lives

Patriotism Isn’t an Option for Everyone

Elon Musk Is Maybe, Actually, Strangely, Going to Do This Mars Thing