Skip to content
Turn Back Covid-19
You are here : Home / English / ‘Life Goes On’ with BTS, as they talk about holding on to hopes

‘Life Goes On’ with BTS, as they talk about holding on to hopes 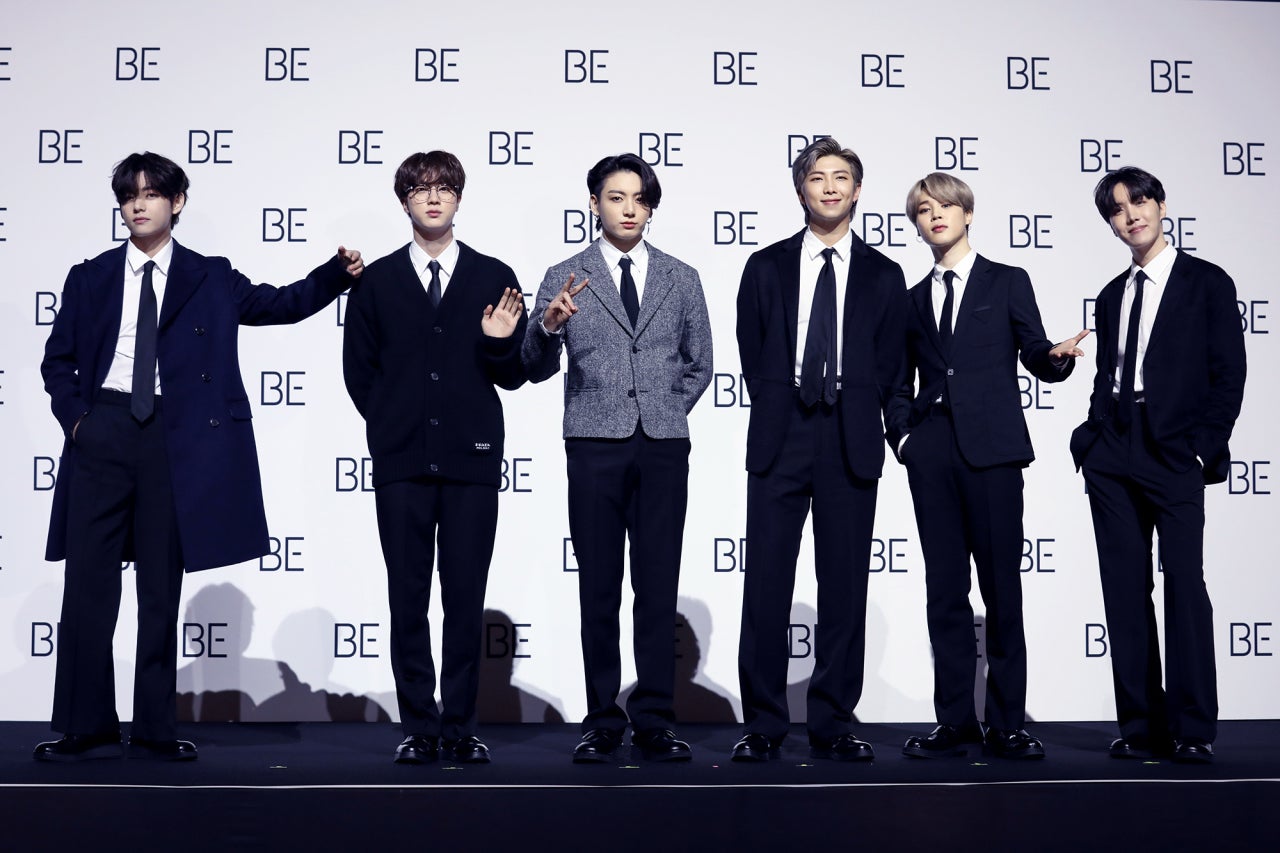 SEOUL — A wave of hope continues with BTS, as the group returned with a highly-anticipated “BE” album that reaches out to those disheartened amid the pandemic.

After dominating the top of the Billboard Hot 100 with its previous single “Dynamite,” the global pop sensation held a live-streamed press conference in Seoul last Friday ahead of the release of the new album.

Strict disinfection measures took place at the entrance, while reporters were seated with extra distance. Excitement and tension filled the air as the six suited bandmates — Suga was absent from recovering from shoulder surgery — stepped into their first official offline media event since the pandemic outbreak.

“Our press conference for ‘Dynamite’ was held online, and it’s our honor and pleasure to meet you (reporters) again. We hope to have a great time together,” said Jimin, looking fairly joyful.

Kicking off the session, the musicians explained that “Life Goes On,” the new album’s lead track, was more toned down than “Dynamite.” But in the same vein as the disco-pop track, “Life Goes On” tells listeners to keep moving forward even in these distressing times, on top of an acoustic alternative hip-hop sound.

“The core message of the song is simple and clear, that life still goes on. We unraveled such an obvious yet stern fact in our own language with a little more weight, softness and solidness,” explained RM, who partially crafted the song along with Suga and J-Hope.

Jin said, “We are placed in a situation where everything has stopped. I feel like that the past one year went by in sadness and emptiness. We tried to express our honest thoughts in the album, that it’s okay and we feel the same as you guys.”

The eight-track album also shows the band’s effort to keep its connection with its fans. Taking a more progressive role in the album-making process, Jimin was assigned the role of project manager, while V and Jungkook served as a visual director and a music video director, respectively.

V said tried to capture the bandmates’ most natural and ordinary sides, while Jungkook, who enjoys filming, shared that he’d like to shoot a music video in the future.

RM added, “For the first time in our career, we’ve shared our working process that was always kept in secret. It’s like sharing a secret recipe for a sauce from a popular restaurant. And we did so, so that our fans could feel more engaged with us.”

With the Grammy nominations just around the corner on Nov. 25, BTS once again expressed its hope to be recognized at the US’ most prestigious pop music awards ceremony.

“We are waiting for the nomination with excitement and nervousness. We’ve actually talked about what Grammy means to us with each other. For me, I still can’t forget the ‘Swagga Like Us’ stage at the Grammys in 2009, when we were still dreaming of success. That was the best performance, and still is, for us, that has left a huge footprint in our youth. So I think it’s obvious to dream about winning at the Grammys,” said RM.

J-Hope chimed in and said, “Since we are a team, it would be so great to receive an award as a group, as we could have achieved everything as a group and everything revolves as a group. That’s so important to us. If we get awarded, I think I’ll tear up.”

With all those suspended tours and in-person interactions with fans, BTS has spent a tough year just like everybody else, even to the point of questioning their identity as musicians. But it was music and tight bond with each other that have pulled the bandmates up from the abyss.

“I had emotionally fallen down several times. Performing onstage and meeting fans held such a big meaning to me, a must-do thing. As those were taken away from me, I was confused, thinking, ‘Who am I and what should I do?’ But thanks to the bandmates, with whom I talked about music and my feelings a lot, I could have overcome it,” said Jimin.

V also shared that he used to get emotionally burnt out in the past, but could have come up to the surface by expressing his feelings into music.

The pandemic has taken a heavy toll on K-pop overall, but it didn’t seem to have shaken BTS from its main purpose, which is to share its honest thoughts and emotions through music. They are not sure about what kind of message to deliver and records to set next. But there’s one thing they can say out loud.

“We don’t dance and sing just to set records. We are the people who feel genuinely happy when performing onstage. We won’t cling to results and will keep delivering messages we want to share with our fans,” said Jungkook.

BTS is set to showcase “Life Goes On” at the 2020 American Music Awards on Sunday in Los Angeles.

Report: Samsung to kill the Galaxy Note in 2021 to focus on folding phones