ANKARA — Pakistan is trying to push through a new law intended to centralize government oversight of the media, fueling concerns about further deterioration of press freedom in the South Asian country.

According to the World Press Freedom Index compiled annually by Reporters Without Borders in France, Pakistan’s ranking has dropped since Prime Minister Imran Khan came into office from 139 in 2018 to 145 in 2021.

The government recently proposed the Pakistan Media Development Authority (PMDA) as a regulator to oversee print, electronic and digital media that are currently under the purviews of over a dozen government bodies and subject to myriad laws and regulations.

In a May 19 document, the government termed the existing framework “fragmented” and “fractured.” It said a “new arrangement has become necessary,” and called for an authority with the power to make its own rules and regulations and to prosecute alleged violators. All existing media laws will be subject to review and possible consolidation.

Press associations, rights organizations, media groups and political parties have risen as one to condemn the proposed body on the grounds that it would institutionalize censorship and undermine independent reporting. Journalist Asad Ali Toor spoke out over violence against his profession at the May 28 demonstration in Islamabad after being the recent victim of an assault by three unidentified men. There was speculation that the attack stemmed from his reports on Pakistan’s powerful military.    © AP

In a joint statement on May 28, the Pakistan Federal Union of Journalists (PFUJ), the Human Rights Commission of Pakistan, and the Pakistan Bar Council described the proposed law as “draconian.” They said it was “nothing less than imposing media martial law,” and will “destroy all public media as it exists in Pakistan today.”

Among others, the All Pakistan Newspapers Society, the Pakistan Broadcasters Association, and the Council of Pakistan Newspaper Editors “totally rejected” the “unconstitutional” law put forward, saying that it “has no place in a democratically elected dispensation.”

In a shared statement, they said the proposed regulator is “intended to hinder media freedoms.” They predicted the move will be resisted at all levels including in court, and said protests and advertising campaigns will be used to raise public awareness.

According to a draft of the proposed ordinance — a legislative order that can be implemented by the president for 120 days and extended only once for the same period — the consolidated media authority will regulate the establishment and operation of all branches of media, including print, digital, electronic and film. Media organizations will all need licenses to operate.

The authority will not be required to give prior notice of its actions, and have the power to suspend any platform with content deemed to be “against the ideology of Pakistan,” or likely to create hatred among the people, disturb peace and tranquility, endanger national security, or that is deemed “obscene, vulgar or pornographic.” It will also be able to seize studio equipment and inspect and seal media premises.

Convictions come with jail terms of up to three years and fines reaching 25 million Pakistan rupees ($160,000), or both.

There is scope for appeal to a tribunal, but only the supreme court will be empowered to rule on the legality of decisions taken under the law. A Media Complaints Council will also be established to review public complaints against media platforms.

Aftab Alam, the executive director of the Islamabad-based Institute of Research Advocacy and Development, said restructuring the entire sector without involving parliament and consulting other stakeholders “is ultra vires to the fundamentals of democratic process.” He strongly objected to the government having arbitrary powers to appoint or remove members of any regulator, tribunal or complaints commission.

“The government must not assume the role of judge, jury and executioner,” he told Nikkei Asia. “An independent regulator consisting of sector experts, human rights champions, literary personalities and technical experts must perform in a participatory, transparent and fair manner.”

Usama Khilji, the director of Bolo Bhi, a digital rights advocacy group, called the proposed ordinance “anti-democratic and unconstitutional by virtue of undermining press freedom and the right to information of citizens.”

“This signifies the intent of the state to clamp down on freedom of expression, especially on the internet to control criticism,” Khilji said.

For Nighat Dad, head of the Digital Rights Foundation, the new licensing regime will have a chilling effect on the budding digital media economy. “Digital media outlets lack the resources of major newspapers and electronic media channels, and cannot be subject to the same onerous requirements as the others,” she said.

The government remains resolute but has also shown some willingness to engage with stakeholders. In a press encounter on June 5, Chaudhry Fawad Hussain, the minister for information and broadcasting, said any new media law will be introduced in consultation with both the opposition and representatives of the media. 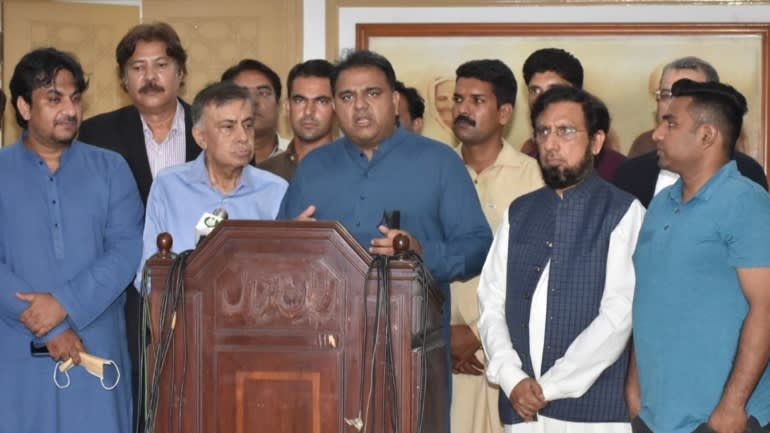 “There is a consensus over the need to amend the existing laws and regulate social media,” he said in Lahore after meeting with officials of the Council of Pakistan Newspaper Editors. “We do not want to compromise on the rights of media workers.”

Farrukh Habib, the junior minister of state for information and broadcasting, said in a recent TV interview that the new regulatory structure would provide greater job security to journalists and safeguard press freedom. He said the coming of the digital media era has made new forms of regulation necessary. “It’s not coming through an ordinance — I am very clear on that,” he said of the PMDA proposal.

Javed Jabbar, a former information minister, agreed that there is a need for content regulation to keep pace with technological advances and to counter the proliferation of false information, but said this should not be done through a government-sanctioned media authority.

“There should be state regulation, self-regulation and social regulation,” Jabbar said, noting that at least 64 media-related laws are in place, some of which predate Pakistan’s independence in 1947. “They need to be updated and modernized after a review,” he said.

Mazhar Abbas, a senior journalist and former PFUJ office bearer, said it will be difficult for the government to move ahead after being rejected so unanimously. “I think they will defer it for now,” he said, expressing doubts about the underlying rationale. “If each media type is governed by separate laws, why do we need centralized control?” he asked.