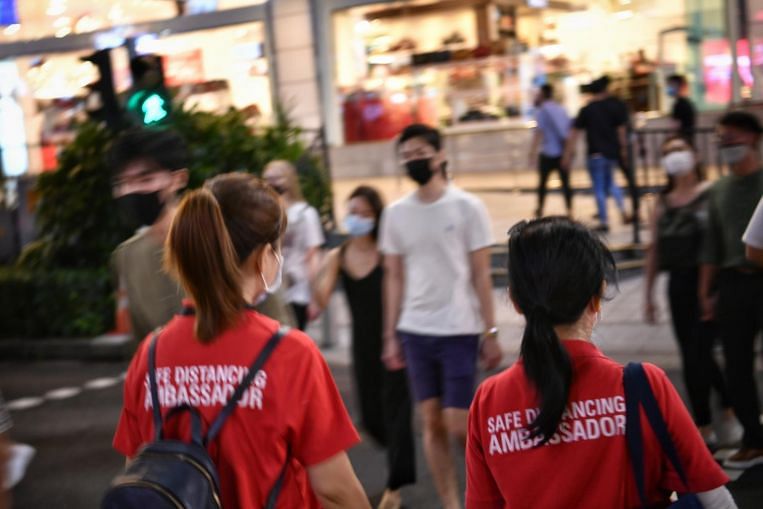 The three men and a woman, aged between 25 and 54, allegedly committed the offences in three separate incidents, said a police statement on Friday (June 11).

One of them, Ng Chwee Hock, was charged on Friday for using insulting words against a public servant at Redhill Food Centre on Thursday (June 10).

“Preliminary investigations revealed that (Ng) allegedly used abusive language towards the SDEO, when he was advised not to sit at the table in the food centre to consume his food and drinks,” police said. SDEO refers to a safe distancing enforcement officer.

Ng purportedly refused to comply with the rules even when police officers advised him to do so, and continued to verbally abuse the SDEO.

Police told The Straits Times that he is currently under investigation for other unrelated offences.

In another incident on May 26, police said they received a report from an SDA that a man taunted her while she was performing her duties at Crawford Lane.

He had allegedly approached the SDA, pulled down his mask and asked her to catch him.

Another woman is said to have then approached the SDA, pushed her on her shoulder and stepped on her foot.

Both the man and the woman then fled the scene.

Police said the identities of the man, who is 54, and the woman, who is 25, were established through investigations.

They are assisting with investigations for using criminal force, voluntarily causing hurt, and for flouting safe distancing measures, added police.

The third incident occurred on May 27 when police officers responded to a dispute involving a group of men at a void deck in Yishun Street 11.

Police said officers spotted the men allegedly gathering when they arrived and beer cans were strewn across a table beside the group.

A 39-year-old man, who suddenly wanted to leave as officers were interviewing the group, allegedly became rowdy and hurled vulgarities at police after they told him to stay put.

The man then purportedly punched another individual in the group when the latter tried to calm him down.

He was arrested for using abusive language against a public servant and for causing annoyance while drunk.

The group will also be investigated for breaching safe distancing measures, said the police.

Individuals found guilty of using abusive words against a public servant can be jailed for up to a year, or fined up to $5,000, or both.

For breaching safe distancing measures, a first-time offender may be jailed up to six months, or fined up to $10,000, or both.

Those convicted of using criminal force can be jailed up to three months, or fined up to $1,500, or both.

For voluntarily causing hurt, an offender may be jailed up to three years, or fined up to $5,000, or both.

The offence of causing annoyance while drunk carries a maximum jail term of six months and a fine of $1,000.