Skip to content
Turn Back Covid-19
You are here : Home / English / Potential for S’pore firms to grow in Middle East, says minister 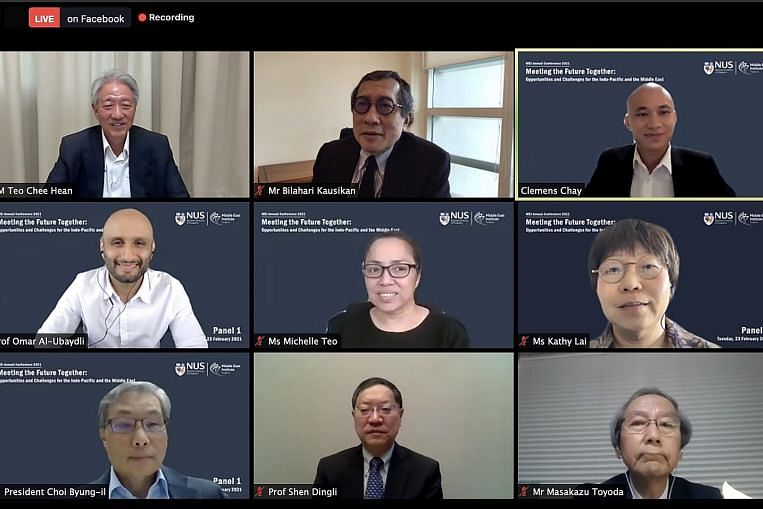 South-east Asia’s economy as a whole is expected to recover this year, and strong consumer sentiment and efforts to diversify in the Middle East provide potential for greater economic engagement between the two regions, Second Minister for Trade and Industry Tan See Leng said yesterday.

Speaking at the Middle East Institute’s Annual Conference, held virtually, he said Singapore companies, for instance, could find opportunities in the food and beverage industry in the Middle East.

He pointed out that the disposable incomes of consumers in Gulf Cooperation Council countries are growing at two to three times the global average. They are also increasingly reliant on supermarkets and hypermarkets instead of small traditional grocery stores.

More than 30 Singapore food companies are doing business in the Middle East, and the hope is that more will follow, said Dr Tan.

Singapore is also the ideal launchpad for Middle Eastern companies to access South-east Asia, he said.

Singapore’s bilateral trade with Middle East countries has grown over the past five years to reach US$43.2 billion (S$57 billion).

With low oil and gas prices and the pandemic-induced global economic slowdown, some Gulf countries have accelerated their diversification, he said. This has created opportunities in sectors such as e-commerce, health and finance.

The Regional Comprehensive Economic Partnership also opens up new opportunities for mutual trade and investment, he said, noting that there is interest from countries in other regions such as the Middle East to join the pact. This is possible because of Asean’s practice of open regionalism as a way to further integrate its economies with the global economy, he added.

South-east Asia is a region the Middle East should pay more attention to, he said. It is projected to be the fourth-largest economy in the world by 2030, and its overall gross domestic product (GDP) growth is expected to rebound to 5.6 per cent this year.

The three-day conference features panel discussions with experts and policymakers on trade, technology and education. This year’s theme is Meeting the Future Together: Opportunities and Challenges for the Indo-Pacific and the Middle East.

Speaking earlier at the event, Senior Minister Teo Chee Hean highlighted three areas of interactions between the Indo-Pacific and the Middle East – in economic partnerships, religious exchanges and people-to-people interactions.

He was asked what lessons can be learnt from the experience of relative peace within South-east Asia compared with the Middle East.

He said that despite the diversity of political systems in Asean, member states have been able to pursue cooperation and live in peace over the last three to four decades. “What we have learnt is that if we are together, it is more likely that we will be able to maintain peace and stability in our region,” he said.

He added that a series of deals between Israel and Arab states to normalise diplomatic ties presents a chance for renewed dialogue and peace in the region.

“And if there is a… sincere and genuine wish to settle differences in an open and fair way… then I think there will be opportunities for these breakthroughs for a more peaceful future.”