Skip to content
Turn Back Covid-19
You are here : Home / English / The ‘nice’ Taliban delusion

Henny Sender is a managing director at BlackRock in Hong Kong and a former Financial Times correspondent.

There was always a lot of wishful thinking in and around Afghanistan; indeed, even to regard that mountainous land between clashing empires as a country is itself a fantasy.

Even more of a flight of fancy have been analyst score cards in recent weeks tallying winners and losers as the Taliban retook control of Afghanistan and named its all-male caretaker cabinet that includes one of FBI’s most wanted men, Sirajuddin Haqqani, as interior minister. The truth is that if it is possible for any place on Earth to have a war with no victors, it is Afghanistan.

Armed with a letter of support from the then Afghanistan Minister of Finance in the fall of 2019, I flew from Hong Kong to Delhi and spent three weeks attempting — unsuccessfully — to obtain a visa to enter the country.

The request had nothing to do with the war, then in its 19th year and counting — at least from the American side. The purpose of my intended visit was to travel to a refugee camp in the west of the country, near Herat, its third-largest city.

But the occupants of this refugee camp were not refugees from conflict, as may have been expected. The camp, built by a Norwegian NGO, had been built to house 25,000 farmers who could no longer farm because they had run out of water to nourish their crops. Tubewells over 300 meters deep into the rocky soil were bone dry.

Interminable fighting and drought have created millions of refugees, many of who have fled across Afghanistan’s porous mountainous borders. Up to 4 million alone went to Pakistan to camp out in Peshawar in the north to sprawling Karachi in the south — less than an hour by plane north of Mumbai.

And in the coming weeks, following the Taliban’s reconquest of the so-called graveyard of empires, there will be more refugees.

Up until now, there has been a degree of wishful thinking from analysts that what we are seeing today is a new Taliban, a kind of Taliban 2.0, with the old Taliban just a figment of the past.

This group of thought maintains that have swapped mountain caves for upmarket hotels in Qatar to negotiate with the ousted government and its foreign defenders, the leadership Taliban is less dominated by the thinking of doctrinaire mullahs and has become more modern in its thinking, a view that is especially prevalent among some segments of the Pakistani elite.

For example, as one senior Pakistani business executive with close political ties told me, when the Taliban, who are Sunni, were closing in on Kabul, men marking the day of Ashura in the Shia-dominated western provinces were allowed to march openly in an apparent sign that local Taliban commanders had grown tolerant.

“There is some sympathy for the Taliban in Pakistan,” one American diplomat who is originally from Pakistan told me. “The jihadis’ victory is a sign that god is on our side. But this is the delusion of Pakistan. The so-called ‘nice Taliban’ is a delusion.”

According to Shaheryar Azhar, a Karachi-based former banker and editor of a highly regarded website, there is deep apprehension. “The combination of religious extremism, a potential refugee crisis and general instability represents a huge danger for Pakistan,” he said.

That apprehension is especially prevalent in China which, in an effort to keep Pakistan stable, has committed tens of billions of dollars upgrading the country’s infrastructure by adding power plants, ports, roads, and even organizing garbage collection for Karachi.

Now, if only defensively, China will likely attempt to do the same in Afghanistan, where its 76-kilometer long border is already heavily fortified. Pakistan, meanwhile, has spent recent years, building a fence covering 90% of its 2,600 kilometer shared border with Afghanistan. 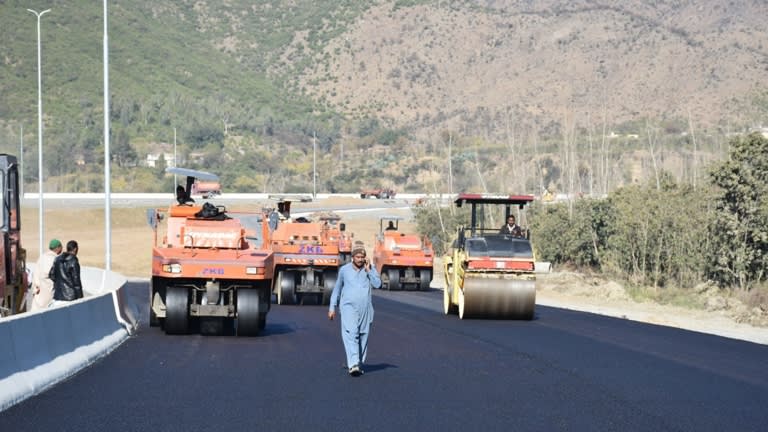 The construction site of Pakistan China Silk Road in Haripur, pictured in December 2017: China will likely attempt to do the same in Afghanistan.   © AP

To be sure, both Pakistan and Afghanistan have changed in recent years. After a terrorist attack on a school in Peshawar in 2014, Islamabad finally took a firm stance against extremists. Today, Kabul is full of educated women as well as men who aspire to be in control of their lives and keep it that way. That creates its own challenges.

“The Taliban is on the horns of a dilemma,” says Karl Eikenberry, a former four-star general who Barack Obama appointed U.S. ambassador to Afghanistan in 2009. “The source of their legitimacy is that they are a theocracy. But, if they are not moderate they will have trouble governing from Kabul.”

In any case, it is unlikely that Westerners will be able to safely journey to western Afghanistan any time soon. Not that I got my visa either back in 2019, probably because I failed to slip enough cash under the table cash as and become vulnerable to escalating demands for money.

After three weeks in Delhi, time was passing, winter was coming and with it the snows that would have made the helicopter flight to that refugee camp impossible, and any trip by road too dangerous. More than two years later, well-wishers can find very little cause to cheer.