Skip to content
Turn Back Covid-19
You are here : Home / English / US eyes using Japan’s submarines to ‘choke’ Chinese navy

NEW YORK — For all its massive military buildup, China has some weaknesses that are hard to overcome. One of them is geography.

“When you look at China’s submarine bases, every single one of them has a fair bit of shallow water that their submarines have to transit through in order to get to deep water,” Tom Shugart, a former U.S. Navy submariner, told Nikkei Asia.

A quick look at Google Earth shows that China’s coast is surrounded by light blue — which reflects shallow seas — in contrast to the dark blue deep waters that immediately drop off from the east coasts of Taiwan and Japan.

Once submarines are in deep water, they are almost impossible to find. Japanese and Taiwanese submarines can go straight into deep waters, a luxury their Chinese counterparts do not have.

“For them to move from China’s near seas to the open ocean, they’re going to have to transit through different chokepoints and straits in the island chains,” said Shugart, an adjunct senior fellow at the Center for a New American Security think tank. “That will provide opportunities for an adversary — the U.S. and our allies’ submarine forces — to monitor more closely and try to intercept them if we were involved in a conflict, or in the run-up to a conflict.” 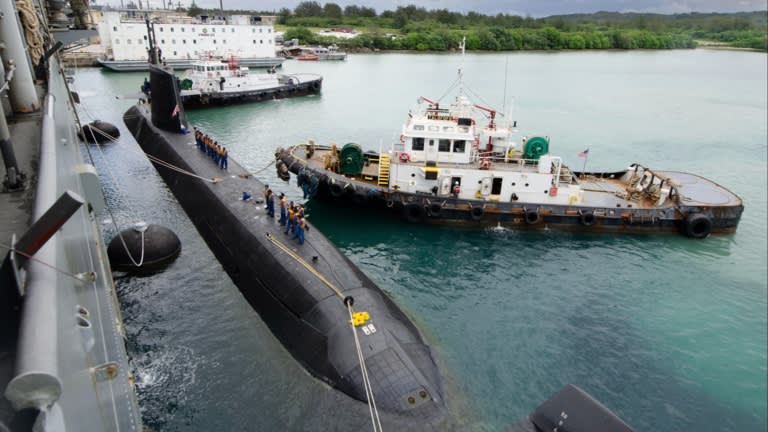 Chokepoint control could be one of Japan’s most important contributions in a potential conflict with China, said Jeffrey Hornung, a political scientist at Rand Corp.

President Joe Biden and Prime Minister Yoshihide Suga underscored “the importance of peace and stability across the Taiwan Strait” in the joint statement following their April 16 summit, the first reference to Taiwan in a U.S.-Japan leaders statement since 1969. This has prompted much discussion about how the two allies can work together if the peace were broken.

On Friday, U.S. Defense Secretary Lloyd Austin floated a new concept of “integrated deterrence.” It calls for allies to work “hand in hand” to prepare for a future war, which will look nothing like the “old wars” that Austin said he himself has executed over the past two decades.

Japan’s Nansei Islands chain stretches from the southernmost tip of Kyushu to the north of Taiwan. It consists of smaller groups of islands including the Osumi, Tokara, Amami, Okinawa, Miyako and Yaeyama chains. In April, the Chinese aircraft carrier Liaoning and five escort vessels passed through the Miyako Strait, a 250 km-wide waterway between Okinawa and Miyako, before heading south to Taiwan.

“Japan’s role should be chokepoint control,” Hornung said. “If you’re looking at the Nansei Islands, there are so many chokepoints that with the combination of the Maritime Self-Defense Force’s submarine capabilities and defensive mining, Japan could plug that up completely, and it would force the Chinese either all the way around Taiwan, or basically right into the battle space in the East China Sea, where the U.S. and Japan can plan for this and control it.”

“The more Japan could focus on defense — either with anti-ship cruise missiles or P-3C maritime patrol aircraft to find Chinese subs or then to hunt the subs — that would free up so many U.S. resources to be able to then fight the fight,” he said.

Hornung made similar recommendations in a recent research paper sponsored by the Office of the Deputy Assistant Secretary of Defense for Strategy and Force Development.

“The diesel electric submarine fleet of our allies like Japan and Australia can be very useful for chokepoint defense,” he said, noting that the mission is relatively stationary and the submarines are not required to move fast. “Diesel electric submarines are very quiet, so if you have a static location where you need to defend one chokepoint in an island chain, that’s a very useful place to put a diesel-powered submarine.”

Nuclear submarines, the likes of which the U.S. fields, are fit for the open ocean, chasing an enemy or preparing to launch a missile from an undetected location.

“Chokepoint island chain defense could be a useful way to employ diesel-electric fleets of the United States’ allies like Australia and Japan and maybe South Korea,” Shugart said. 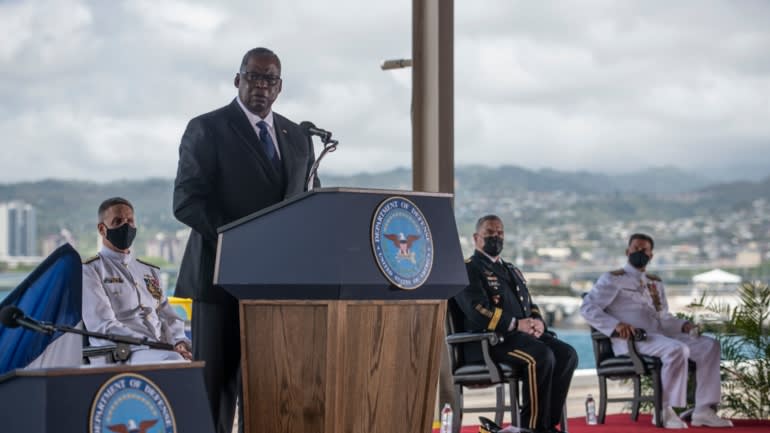 U.S. Defense Secretary Lloyd Austin speaks at the Indo-Pacific Command change of command ceremony, held at Joint Base Pearl Harbor-Hickam in Hawaii on April 30. (Photo courtesy of the Department of Defense)

That may be the type of collaboration the U.S. and its allies increasingly plan, as they prepare for the possibility of facing the advanced capabilities of China.

“The way we’ll fight the next major war is going to look very different from the way that we fought the last ones,” he said, emphasizing the need to “understand faster, decide faster and act faster.”

Deterrence has always meant fixing a basic truth within the minds of potential foes, Austin said.

“And that truth is, that the costs and risks of aggression are out of line with any conceivable benefit,” he said. “To make that clear today, we’ll use existing capabilities and build new ones, and use all of them in networked ways — hand in hand with our allies and partners.”

The first audience is inside the Department of Defense, to break the silos among the different services, Gregson said. The secretary also was addressing the entire U.S. government, calling for an approach that employs all elements of national power. 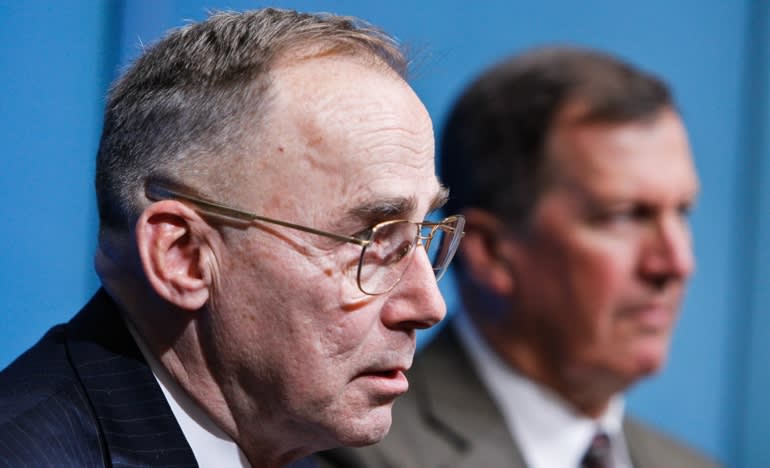 The third audience consists of allies and partners, Gregson said, as Austin seeks to have a joint operational command element with countries such as Japan. Gregson, formerly the top American general in Okinawa, has seen U.S.-Japan coordination up close.

“I was thrilled to see Secretary Austin use the word ‘integrated’ — that’s a much, much more meaningful word, a much more powerful word than the jargon we’ve heard in the past, like ‘interoperability,'” said Gregson, now a senior director for China and the Pacific at the Center for the National Interest, a conservative think tank.

“We don’t do nearly enough work on contingency planning or on the development of operational concepts and developing the capability for U.S. and Japanese forces to be networked together so that we can fight as one cohesive force,” he said.

“What’s needed for the integration would be a detailed common operational picture of all the services,” he said, “so that there is an understanding of what everybody’s role is and a very rapid capability to react upon detection of threat, that doesn’t require consultation.”

These capabilities demand “eyeball to eyeball contact between Americans and Japanese on a daily basis as we work through all these issues — a lot more contingency planning,” he told Nikkei.